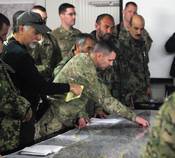 Afghan National Army Col. Sanam Gul, the 4th Kandak, 4th Brigade, commander, informs the staffs from Task Force Bulldog and the 4th Kandak on the geography of the region during a joint planning session at the Partnered Tactical Operations Center on Forward Operating Base Shank.

The first 100 days of the 3rd Brigade Combat Team, 1st Armored Division, deployment over, a renewed and energized focus is on partnered planning, collaboration and mission accomplishment.

“The Afghan National Army staff officers are trained in the military decision-making process,” said Army Maj. Ralph Overland, a native of Phoenix. “It’s always a good discussion and everyone is certainly involved when we get together and plan together.”

“When we got here, it was apparent the U.S. Army brigades before us did a great job with teaching and guiding the 4th Brigade, 203rd Corps, with working through problems and developing plans using the military decision-making process,” said Overland, the operations officer for the 3rd BCT, 1st AD, deployed from Fort Bliss, Texas. “That being said, it was a very easy transition into mission planning since they knew how we would operate.”

Falling in on a trained, experienced counterpart has made things easier on Bulldog staff members who instead of leading planning session act more as advisers.

“We start the discussion, and our counterparts lead the planning,” said Overland. “We highlight key points for them to remember throughout the planning and orders process, but they lead the entire effort and will continue to throughout the execution phase.”

The sense of accomplishment is also seen across the table with the battalion staff with the 4th Kandak, 4th Brigade, soldiers.

“I’m very pleased with coalition forces and the help they’ve brought to me and my soldiers,” said Afghan army Col. Sanam Gul, the 4th Kandak, 4th Brigade Commander, speaking through an interpreter. “We’ve had the privilege of benefiting from the various classes that have been provided to us – from logistics training to tactical training, and we really appreciate it.”

“We have partnered patrols and missions with our coalition forces counterparts,” said Gul. “We are tracking, making mission schedules and everything else associated with keeping our enemies at bay. Whenever we feel we need the help of coalition forces, we ask, but for the most part, anything we can take care of without coalition support we do.”

“But as far as the [Partnered Operations Center], it is an excellent venue for us to track and monitor our checkpoints and have communication with the soldiers I have outside of the base,” said Gul. “This has been an integral part of our success and in our goal of becoming self-sufficient from planning to execution.”

“With the advice, training and support from coalition forces, our mission of holding northern Logar province in the near future seems very promising,” said Gul.
Post a Comment